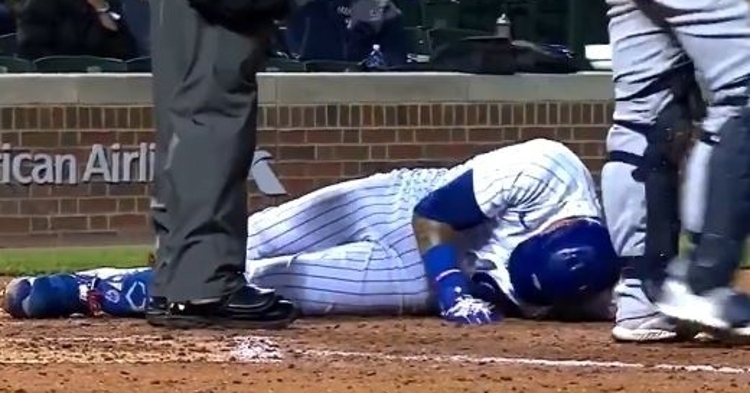 Javier Baez dropped to the dirt in excruciating pain after getting beaned.

CHICAGO — The Chicago Cubs dodged a bullet on Monday night, as star shortstop Javier Baez went down in visible pain before walking it off. Baez was drilled just above the right kneecap by an 87-mph sinker thrown by Milwaukee Brewers reliever Eric Yardley.

The hit by pitch caused Baez to crumple to the ground, and trainers rushed onto the field to check on him. Baez was able to shake off the pain and head to first pitch, clearly fortunate that he was not plunked directly in his kneecap. The Cubs faithful at Wrigley Field supported Baez with a "Javy!" chant, and "El Mago" remained in the game.

Javy goes down in a heap after getting plunked on his right knee, but is able to take 1st base and stay in the ballgame.@Cubs #GoCubsGo pic.twitter.com/XuTXXCx61B

Top Javy Baez News
Top Chicago Sports News of the Week
Partner of ChicagoBearsHQ.com, ChicagoBullsHQ.com, CubsHQ.com, and TigerNet.com
ChicagoSportsHQ is an independent site and is not affiliated in any way with Chicago Professional Sports Teams.