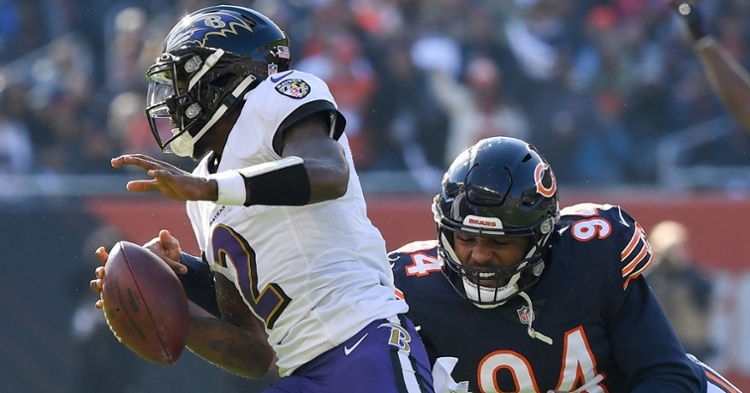 On Sunday, there was some good and some bad as the Bears lost their fifth straight, falling to Baltimore. The Bears are now 3-7 after losing to the Ravens 16-13 at Soldier Field.

So let's take a look and give out some grades based on the performances by position after the loss against the Ravens.

After his most impressive game as a pro, the offense looked a bit out of sorts on Sunday. Fields was just 4-of-11 for 79 yards and added 23 yards on the ground. But once he got hurt, the offense boosted from Andy Dalton coming into the game. The Red Rifle threw for 201 yards and two touchdowns on Sunday and put the Bears in prime position to win the game. It'll be Dalton this week on a short week with Fields recovering from injury.

With David Montgomery coming back from injury, the running back room was bolstered. Montgomery had 14 carries for 58 yards and added a catch for 9 yards. Khalil Herbert was quiet but spelled Montgomery a carry. The Bears certainly need to keep them involved as much as possible.

The passing game was much better, so were the receivers. Allen Robinson missed the game with an injury, but the Bears had two receivers over 100 yards. Second-year wideout Darnell Mooney caught five passes for 121 yards and a touchdown. Marquise Goodwin also had four catches for 104 yards and a touchdown. Jakeem Grant added a catch and a carry for 17 total yards, and Damiere Byrd had a catch as well. Best game from the receivers so far.

This unit certainly has talent and finally showed it on Monday. Cole Kmet and Jimmy Graham handled the tight end duties for this squad, and Kmet caught a pass for 12 yards. Graham was targeted a handful of times, including two catches for 25 yards. I'd like to see more out of this unit as the year progresses.

The offensive line was bad, allowing three sacks of quarterback Justin Fields/Andy Dalton but creating holes in the running game all day long. It could partially be blamed on coaching, but the Bears were out of sorts on the offensive line all game long. Not to mention, the unit accounted for a lot of penalties.

The defensive line was good. They did a solid job stopping the run and getting pressure on Tyler Hundley. Trevis Gipson and Eddie Goldman had a sack.

Any unit that boasts Khalil Mack deserves some props, but Mack went down with an injury last Sunday and is out the rest of the year. Roquan Smith had 17 tackles, and the rest of the unit was very involved — including 3.5 sacks from Robert Quinn. Need this unit to continue to step up.

This unit was good on Sunday. But, the Bears needed this unit to make a play to change the game, and they could not deliver. Without Eddie Jackson, the unit did pick up a sack and a pick. Kindle Vildor had a sack, and Tashaun Gipson had an interception. However, the defense was gashed during the game's final drive that gave the Ravens the win.

Kicker Cairo Santos missed a kick and made an extra point. The Punt unit was active, punting the ball five times and landing inside the 20-twice. The return game was quiet.

The play calling was fine once Dalton got in the game, but it was bad for Fields at QB. However, the Bears were not disciplined. Plus, a two-point conversion call made the final drive a bit harder. Their undisciplined actions and careless penalties will make any game hard to win.

Nonetheless, week 11 is in the books, and the Bears are 3-7. They continue the season on Thanksgiving against the Lions.

Top Andy Dalton News
Top Chicago Sports News of the Week
Partner of ChicagoBearsHQ.com, ChicagoBullsHQ.com, CubsHQ.com, and TigerNet.com
ChicagoSportsHQ is an independent site and is not affiliated in any way with Chicago Professional Sports Teams.