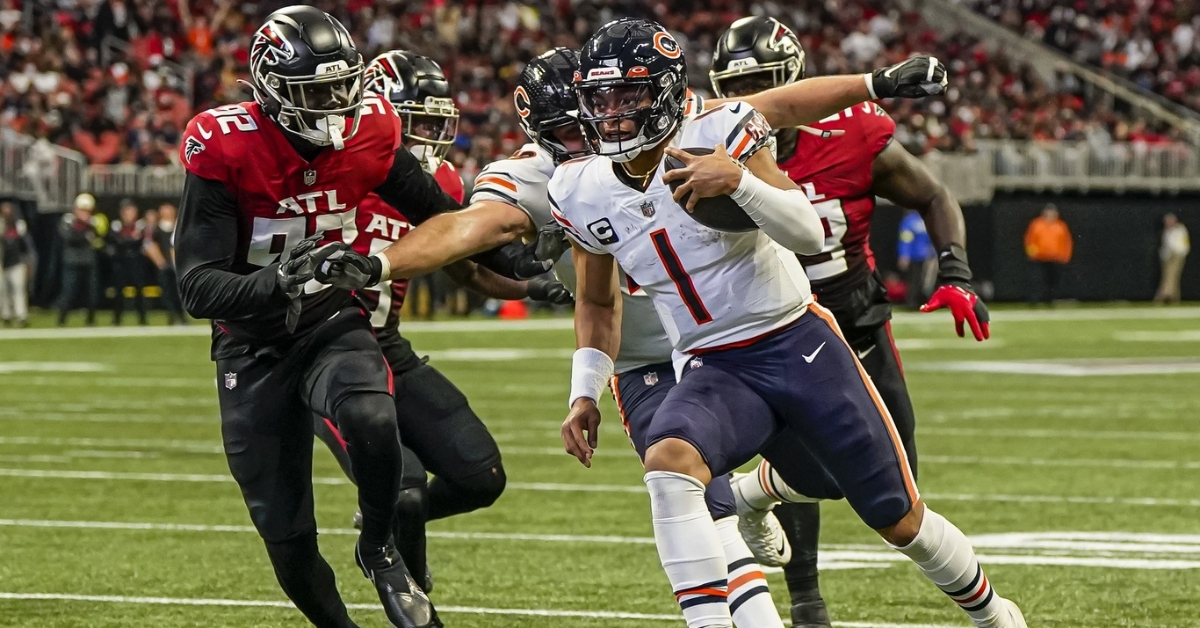 It was another exciting game from Justin Fields and the Bears offense that went down to the wire. Unfortunately, the defense and offensive line let them down again, which has become a theme in recent weeks.

Yes, as the losses pile up, the fans grow even more frustrated with the current state of the Bears and their positioning in the draft order, but this is a team that is building for the future. There are a lot of positives that can come from this game, but unless the defense and the offensive line are fixed shortly, those positives will only be positives, and the overall progress of this team will not age well.

This first takeaway is not directly Bears-related, but it does have to do with a former Bears player in, Cordarrelle Patterson. Say what you want about his style of play and the type of player he is. Patterson was a first-round pick of the Minnesota Vikings nine years ago based on his overall potential at the WR position.

While he flashed potential as a WR for many years, Patterson was never given the opportunity he deserved and thus started to transition to RB later in his career. Not your prototypical RB, Patterson has begun to thrive in that role with Atlanta and showed flashes of that as a member of the Bears too. However, Patterson's true calling comes on the special team's side of things, where he is one of the best, if not the best, to do it.

Sure, Devin Hester is still known as the greatest return man in NFL history, but Patterson is right behind him as the second-best. Some argue that Patterson is better than Hester, especially on the kick return side of things. Following his 103-yard return touchdown on Sunday, Patterson officially sits alone on top of the NFL record books as he now has nine kick return touchdowns for his career, which is the most all-time. In a time where kick returns are becoming less frequent, this is a record that may never be broken.

The most kick return TDs in NFL history: Cordarrelle Patterson with No. 9. ?? pic.twitter.com/w29tMgsC9T

Justin Fields and his health

If there was any doubt about the type of QB Justin Fields could become, the second-year man has put those questions to doubt over the last month. Granted, his passing numbers are not ideal, but the rushing aspect of his game has been the difference, as he is on pace for 1000 yards rushing this season.

At some point, you have to wonder if all that running will hurt Fields or, at worst, shorten his NFL career from the hits he has taken. If the end of the game is any indication, that time may have come in week 11 as Fields was seen leaving the field on the Medical Cart holding his shoulder in the fourth quarter.

Although an MRI is set to come today, and the severity of that injury is not known, Fields is clearly in pain, which is not a good sign for Chicago. If he is hurt for any period, not only will Trevor Simien be summoned to start next week, but they may let him start the rest of the season. That would be a crushing blow to an offense that finally started to show signs of life this season.

From @GMFB: On the #AZCardinals starting QB, the status of WR DeAndre Hopkins and what’s next for #Bears QB Justin Fields’ left shoulder. pic.twitter.com/KbuoNjGbmL

Herbert's loss is a big one

While most of the talk surrounded Fields and his late-game injury, another player was out for the game in Khalil Herbert. Primarily the backup RB to David Montgomery all season, Herbert has emerged as the go-to back in what has become a three-headed monster in Chicago.

Granted, that is still impressive, but their rushing numbers will not be as good as they have been without Herbert for another month or so. What once looked to be a valuable backup RB is proving to be a lot more than that, as Herbert may be the future of this team. Hopefully, the Bears can figure out how to adjust to his absence and get some other guys involved.