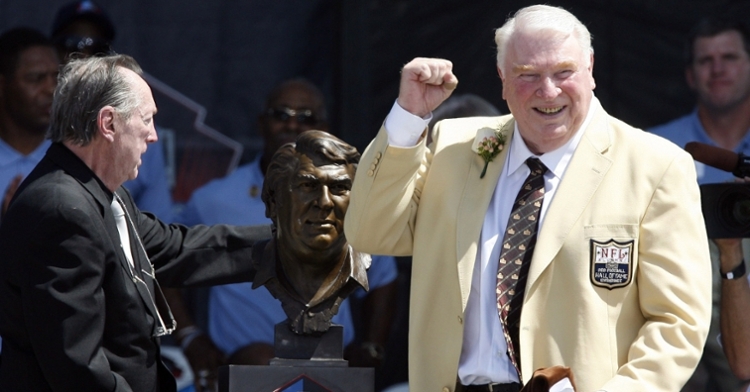 Iconic John Maddon passed away unexpectedly this morning at the age of 85.

"On behalf of the entire NFL family, we extend our condolences to Virginia, Mike, Joe, and their families, said NFL commish Roger Goodell. "We all know him as the Hall of Fame coach of the Oakland Raiders and broadcaster who worked for every major network, but more than anything, he was a devoted husband, father, and grandfather.

"Nobody loved football more than Coach. He was football. He was incredible sounding board to me and so many others. There will never be another John Madden, and we will forever be indebted to him for all he did to make football and the NFL what it is today."

There has never been a person more a part of your life and never physically in your life. John Madden was the man! RIP coach, commentator, legend pic.twitter.com/h7axywempA

MDS nails it with his closing line: "John Madden may have been the single most influential person in the history of the sport of football."

The NFL announced John Madden has passed away at 85.

John Madden is the NFL. You cannot tell the story of its rise without tracing it through him. A true face of the league and an ambassador for football and a universally beloved figure. RIP

OMG the greatest analyst of all time of any sport passed today - JOHN MADDEN - In the world of TV it doesn’t get any better than Coach Madden - legend -icon & GOAT / Pls May Coach Madden RIP ! @TheMontagGroup @CBSSports

“Be a winner. Stand for something. Always have class, & be humble.”

John Madden was one of the most remarkable people in the history of football. A head coach at 32, a Super Bowl champion by 40, then building one of the best broadcasting careers ever two years after that. A legendary career and life.

The best duo in the NFL broadcasting booth, ever. RIP John Madden. Say hello to Pat for us. pic.twitter.com/GTbw8Ky4hJ

RIP to the voice of football for generations, John Madden. pic.twitter.com/0hJgtZsxwc

Hard pressed to find someone more influential to their sport than John Madden. RIP... pic.twitter.com/nroZykHUsV

When you think NFL football, you think John Madden.

RIP to a Legend. pic.twitter.com/8JYH7H9GKW

Cowboys’ owner Jerry Jones: “I am not aware of anyone who has made a more meaningful impact on the National Football League than John Madden, and I know of no one who loved the game more.” pic.twitter.com/woRffvTwox

Few approached life with the joy of legendary football coach & broadcaster John Madden. A colleague at CBS, he was a gentleman with a boisterous sense of humor. On the sidelines & in the booth, this voluble mountain of energy was a trailblazer. A golden era ends with his passing.