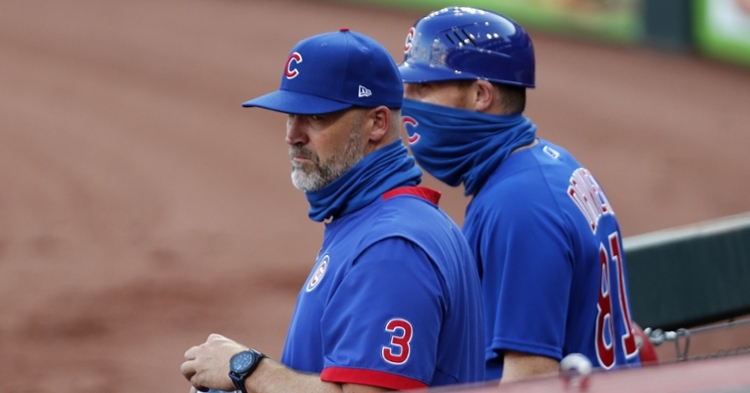 Ross and Co. getting ready for the 2021 season (David Kohl - USA Today Sports)

Andy Green, bench coach, second season on the Cubs coaching staff following nearly four seasons as manager of the San Diego Padres from 2016-19. Prior to joining the Padres, Green served as third base coach for the Arizona Diamondbacks during the 2015 campaign, his first season coaching at the big league level.

Willie Harris, third base coach, first season on the Cubs coaching staff after he was the Reds minor league outfield and baserunning coordinator in 2020. He was a manager in the Giants system from 2017-19 after starting his coaching career as a minor league hitting coach in 2016. Harris played 12 major league seasons and 1,046 games among seven franchises, winning the 2005 World Series with the Chicago White Sox.

Tommy Hottovy, pitching coach, third season on the Cubs coaching staff. Hottovy joined the Cubs as a coordinator in major league scouting in 2015 and was promoted to major league pitching coach December 2018. He had a 10-year pro pitching career, including parts of two seasons in the majors with Boston (2011) and Kansas City (2012).

Chris Valaika, assistant hitting coach, first season on the Cubs coaching staff and his fifth as a coach in the organization. Spent the previous two seasons as Chicago’s minor league hitting coordinator. The former infielder played parts of four seasons in the majors with Cincinnati (2010-11), Miami (2013) and the Cubs (2014).

Kyle Evans, senior director of major league data and development, second season on the Cubs coaching staff. Evans is in his 10th season in the Cubs organization, most recently serving as senior director of player personnel. Evans, who joined the Cubs front office in 2012, pitched for six seasons in the Indians minor league system before joining the Red Sox in advance scouting for 2006 and 2007.

Chad Noble, bullpen catcher, eighth season with the Cubs in this role.

Cubs officially announce coaching staff. Chris Valaika (assistant hitting) and Willie Harris (third base) are the new additions. Franklin Font was offered another job within org, but opted to pursue outside opportunities. Ross may add another staff assistant before the season.

Top David Ross News
Top Chicago Sports News of the Week
Partner of ChicagoBearsHQ.com, ChicagoBullsHQ.com, CubsHQ.com, and TigerNet.com
ChicagoSportsHQ is an independent site and is not affiliated in any way with Chicago Professional Sports Teams.