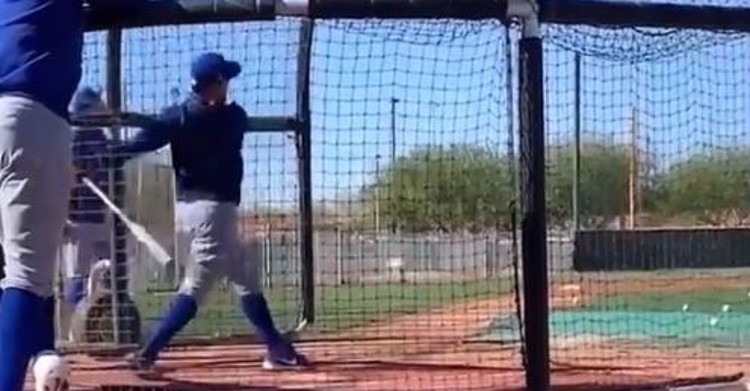 Baez getting some batting reps in on Saturday morning (via Cubs)

Hello, Cubs fans out there! Hope everyone is having a great day.

We will try to have this feature a few times a week, so everyone gets a type of summary or cliff-notes of what is happening on a regular basis at Cubs camp.

Saturday's workout was headlined by Javy Baez, Willson Contreras, and others getting some reps in the batting cages.

Let's get right to the action with Baez getting some work in on a pretty morning:

We love the sound of bat cracks in the morning. ?? pic.twitter.com/PlZ0Z0bDPD

Another short clip of 'El Mago' getting his hacks in with music:

You know Contreras was happy to get his hacks in as well as Jason Heyward and David Bote:

Cool picture of El Mago and J-Hey starting their first practice of 2021:

Expecting some good things from @ZDavies3 this year. #Cubs pic.twitter.com/2xizn19oVf

So far, all smiles for the Cubs at Spring Training as David Ross looks really relaxed in his second year of coaching:

Smile for the camera! ?? pic.twitter.com/Wu9rrigJu3

Who is this guy? Looks sorta like Nico Hoerner but has longer hair and someone attempting to grow a beard:

Nico with the long hair. pic.twitter.com/sjIQhBBv2k

Veteran pitcher Jake Arrieta spoke with the media Saturday about his excitement to be with the Cubs this upcoming season.

Arrieta has high expectations for himself.

"It's really just to prove that I'm still capable of performing at a high level, the level that I expect to perform at."

Arrieta wasn't satisfied with how he pitched with the Phillies the last several seasons.

"The last three years weren't to my expectations. I had to deal with several physical setbacks - a meniscus that I pitched through all of '18, which was tough, but I didn't want to have surgery during the season," he said. "Then in '19, I ultimately had to have bone spurs taken out of my elbow again. So there were some slight physical limitations. But having said that, I just didn't perform the way I was capable of. But I have a lot in the tank. I have a lot to still accomplish in this game. And I'm excited that it's gonna happen in this Cubs uniform again."

Arrieta also talked about being reunited with his former catcher Contreras.

"I can see the look in his eyes - he’s focused. It’s nice to see him smile. He gave me a big hug, he almost hurt me a little bit. Same thing with Rizzo. It was nice to hug that guy this morning. It was good to see him again."

FYI: Please take a second or two to join our CubsHQ Instagram account if you haven't already.

New pitcher Trevor Williams talked about getting to play for his childhood team and the favorite team of his dads:

Good news for the Cubs as infielder Sergio Alcantara cleared waivers and will be heading to Triple-A Iowa for depth purposes for the big league club.

INF Sergio Alcantara - who was DFA'd a couple days ago by the Cubs - cleared waivers and has been outrighted to Triple-A. He will be in big-league camp as a non-roster invitee

It's official news as the Cubs signed Jake Marisnick, and they let go Phillip Ervin to make room on the roster.

Alec Mills told the media recently that he will do whatever it takes to help the ballclub if that means starting or meaning a long man out of the bullpen:

Alec Mills ready for any role for #Cubs in 2021: https://t.co/OdinSPFFOj pic.twitter.com/6PI6Eiy2W3

Check out this rare vintage photo of Cap Anson and his glorious stache: