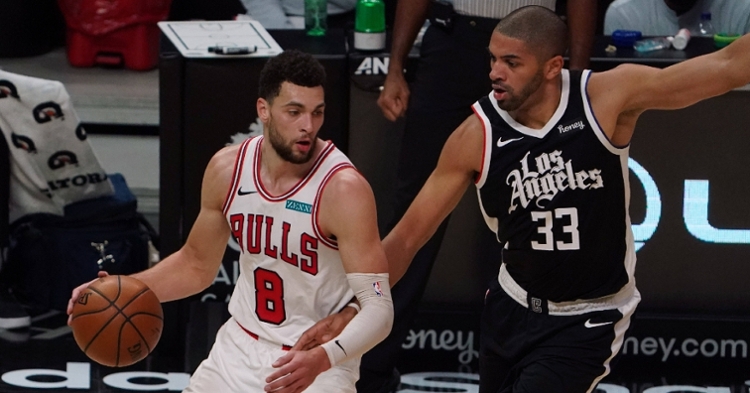 Continuing to play shorthanded, even more so with Otto Porter Jr out of the lineup Sunday against the Clippers, Chicago continues to prove they are not the same old Bulls from the past two seasons.

This team is not only scoring points in bunches this season, but they are proving they can play with the best teams in the game. That was once again the case on Sunday as Chicago gave the Clippers everything they could handle. In the end, Chicago would end up on the short end of things once again, dropping a 130-127 contest despite Zach Lavine pouring in 45.

Typically, the Bulls have been getting out the gates quickly, and this was no different. Led by Patrick Williams, Coby White, and Lavine, the Bulls were off and running as the Clippers had no idea where the scoring was coming from. If it wasn't for Kawhi Leonard's play early, the Clippers might not have scored as Chicago raced out to a quick 15-7 lead.

That lead continued to grow with Wendell Carter Jr getting in on the action, but Leonard was shouldering the load for LA once again. In desperate need of more help, Luke Kennard and Paul George got in on the fun, cutting the Bulls lead to 20-17. The Clippers continued to make a comeback effort, but Thaddeus Young and Garrett Temple provided sparks off the bench once again to stretch the lead back to 27-19. Williams knocked down a three late in the quarter, and the Bulls were up 31-22 after one.

While the offense continued to play great, it was the defense that may have put one of their best efforts forth in that first quarter. Knowing this, Young and Daniel Gafford got right after it in the second to push the Bulls lead to 13. After a slow start to the game, George started to heat up as Lou Williams, and Marcus Morris joined him to close the gap to three following a 10-0 run.

A few made buckets from Temple kept the momentum in the Bulls favor, but George had the hot hand now as he was taking over for the Clippers. The Bulls bench continued to step up with Denzel Valentine now getting in on the scoring action. However, whenever the Bulls made buckets, the Clippers had answers Leonard joining Williams and Morris on the offensive to support George. The teams continued to exchange buckets the remainder of the second, but Chicago still held a 59-52 lead at the half.

Sensing the Clippers were starting to figure things out offensively, Carter Jr and Temple did their best to keep the Bulls afloat. Patrick Williams and Lavine matched what those two were doing as Chicago still managed to hold a 71-64 lead. The big two of Leonard and George continued to pave the way for the Clippers offense, but with Serge Ibaka starting to make his presence felt, Los Angeles closed the gap to single digits.

After Patrick Beverley tied things up at 77 apiece, Lavine went down and buried a triple only to have Leonard answer on the other end.

A season-high 45 points for Zach LaVine on Sunday.

Leonard made another three on the next possession to give the Clippers their first lead since the first as he was taking over. With the help of White and the Bulls bench, Chicago was able to withstand the Leonard storm, and things were tied 94-94 with just one quarter to go.

For Chicago to get to the level they expect to be, they will have to beat some of these great teams. Through the early part of the season, the wins may not be happening, but they are showing they can play with anyone. With momentum starting to lean the Clippers way, Temple made sure the Bulls wouldn't go down without a fight getting the offense rolling in the fourth.

Zach LaVine is now the 3rd player in Chicago Bulls history with at least 10 40-point games.

He's also the only player in Bulls history with 10+ threes in a game, and he's done it twice.

Patrick Williams followed that up with one of his better games in the past few weeks, but Lou Williams and George provided the early offense for LA in the fourth, giving the Clippers a 103-100 lead. With the game tied at 103, Los Angeles surged to their largest lead of the game when Lou Williams and Morris knocked down threes to make things 109-103.

In danger of letting things get away, bench players Young and Valentine teamed up with Lavine to help keep things close 111-110. The back-and-forth scoring continued the rest of the fourth quarter, with Temple putting the Bulls back in front by one following a pair of made free throws. That was the final lead for Chicago as Lou Williams and Nicolas Batum helped put the Clippers up seven, their largest lead of the game. Lavine tried to bring the Bulls back and closed the gap to one possession, but the Clippers managed to hold on 130-127.