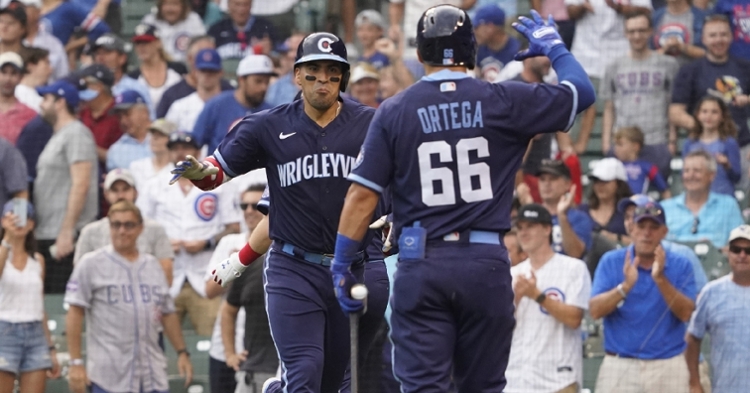 CHICAGO – The Chicago Cubs today placed catcher Robinson Chirinos on the 10-day injured list (retroactive to September 23) with a left oblique strain and recalled outfielder Greg Deichmann from Triple-A Iowa. Additionally, right-handed pitcher Jason Adam has been selected from Triple-A Iowa, optioned to Iowa, then recalled to serve as the “29th man” for the club’s doubleheader vs. the St. Louis Cardinals.

Deichmann, 26, will begin his second stint with the Cubs this season. After making his major league debut, August 6, he hit .174 (4-for-23) with one RBI in seven games for Chicago. He has played in 34 games for Iowa, hitting .227 (27-for-119) with eight doubles, two triples, three home runs, 13 RBI and three stolen bases since he was acquired by the Cubs, July 26, from the Athletics with right-handed pitcher Daniel Palencia for left-handed pitcher Andrew Chafin.

Adam, 30, has no record and an 8.22 ERA (7 ER/7.2 IP) in nine outings for Chicago this season, walking six and striking out 13. He was designated for assignment, May 25, and joined Triple-A Iowa after clearing waivers. Adam suffered an open dislocation of his left ankle and was placed on Iowa’s seven-day disabled list, May 23. Upon his return to action, he has posted a 1.80 ERA (1 ER/5.0 IP) with one walk and seven strikeouts in five outings from September 7-22 between the ACL Cubs and Iowa.

Top Jason Adam News
Top Chicago Sports News of the Week
Partner of ChicagoBearsHQ.com, ChicagoBullsHQ.com, CubsHQ.com, and TigerNet.com
ChicagoSportsHQ is an independent site and is not affiliated in any way with Chicago Professional Sports Teams.